The recent Carnegie Mini-meet saw clubs participating from 3 of the 4 Scottish Districts. Competition was high but a tremendous effort from the team saw Step Rock sweep the Best Visiting Club award with 488 points, to Perth City’s 434.

Jamie’s performances were rewarded with Best Boy in the 7-8-year-old category, Oliver pushing him all the way.  Jack also placed in the top 6 in 3 events, gaining a bronze in the 25m breaststroke. For the second year running, Ellie scooped Best Girl in the corresponding girl’s category. A great atmosphere helped the relay team to gold – Ellie, Jamie, Jack and Ollie bringing their team home.

For the 9-year-old boys, Corey took top honours, winning the Best Boy award. Sam C. and Finch also raced to podium places, with Sam taking gold in the 50m breaststroke. Teaming up with Kaitlyn and Beinn, Corey and Sam stormed to a superb win in the relay, ahead of a determined Larkhall team.

With six golds and a silver medal, it was no surprise when Fraser was awarded the Best Boy in the 11-year-old age category. Rowan also had an excellent day, a superb PB swim in the 200m IM giving him bronze, and another PB in the 50m butterfly to secure a silver.

Arguably Step Rock’s outstanding swim of the day came from 11-year old Kayla, who smashed her 100m freestyle PB by almost 6 secs, despite this being set only weeks previously. This gave her a very well-deserved bronze medal. Other medals came in her breaststroke swims, but her biggest improvements were in the 200IM and 200 free – in both events, she finished 4th. Competing in the 200m freestyle and 100m backstroke, Isla took a bronze and silver respectively, with encouraging PBs in both swims. Joining the girls for the mixed relay were Rowan and Fraser – they were just unable to hold off a strong Carnegie quartet and took silver. 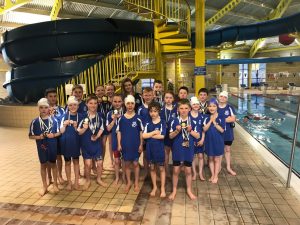