The first of four Novice and Fife League meets was held at the Michael Woods Centre, Glenrothes. 2017 champions in all categories, the Step Rock swimmers have a hard act to follow this year, but the youngsters rose to the occasion swimming very well in what was for many their first gala at this level. An amazing 33 out of 36 individual swims were personal bests or first-time swims.

An ongoing dispute over acceptable competition swimwear controversially led to the afternoon Fife League being downgraded to a Level 3 Meet, resulting in the withdrawal of a number of Fife clubs. The strangely subdued atmosphere did not seem to affect the swimmers though, with 16 out of 18 swimmers securing PBs in the 200m backstroke. Isla Thoms won the 11/12 girls event in an outstanding 10s PB, also an unaccredited National Bronze squad time. Angus McCallum followed that up with a win in the 15+ boys event. Both Isla and Angus secured double victories in backstroke, taking the top spots in the 100m event also.

On the day, the boys 9-10 team of Corey Philip, Beinn Anderson, Finch Geary and Sam Coull had no-one else in their age group to race against, but they challenged their older opposition well, Corey swimming aggressively in his 50m backstroke and Sam racing to a 3 second PB in the 100m freestyle.

One of the last swims of the afternoon was that of Hamish Findlay (14). His time of 1:07 for 100m freestyle was a 4 second PB, a superb effort and a reward for his consistent application in training. 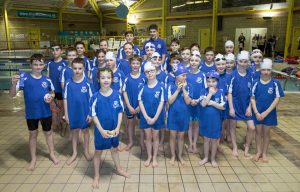